A downloadable game for Windows

Some campers gathered 'round the fire to entertain one another with gruesome tales of ghosts and goblins. Jimmy, the oldest, unfazed by such nonsensical fiction, had a story of his own:

"You guys ever seen a bear? No, not like the ones you see at the zoo or that dumb cartoon bear that steals picnic baskets, I'm talking REAL bears - the bears the government doesn't want us to know about. REAL bears don't live in the woods, they live in the water, and they come out to feast at... whatever time it is right now. REAL bears love to eat kids who sit around telling stupid ghost stories at their summer camps, and they don't even need to chew, they just swallow their meal whole and keep going.

The governments of the world have been keeping REAL bears a secret from the public since the beginning civilization as we know it, because they're afraid of the pandemonium the bears could cause if people knew. But I know about them. I've seen one and lived to tell the tale, but nobody's ever believed me. Everyone I've ever told has called me crazy, but I know that's just because they're government plants trying to keep me quiet.

My friend Timmy went to this very camp last year, and one day he decided to go for a swim in that lake over there to our right. Poor kid didn't even have time to scream before a bear dragged him under, never to be seen again. Yeah, that's right. That lake is full of bears, and I'm going to prove it."

The younger campers shuddered as Jimmy confidently strode to the edge of the dock and started poking at the water with a stick. A few moments passed, and just as it seemed as if Jimmy's bluff had fallen flat, a tremendous shape sprang from the water and pulled him down into the lake.

What did Jimmy think was going to happen? Perhaps the other campers will never know, but one thing they DO know is that they need to get back to their cabin before the bears eat them alive!

Run to the right, and don't get eaten.

The game begins when the first player steps on the dock, and any players who aren't close by are removed (see note at the bottom of the description).

This game theoretically supports 4 player local co-op but we were unable to get it to recognize more than one controller outside of the editor. For now, players 3 and 4 are still spawned in, but are despawned when the other players start the round. 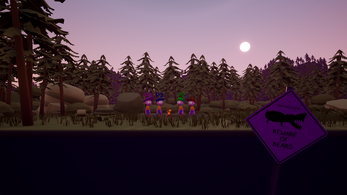 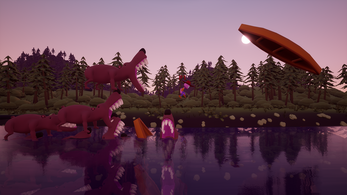 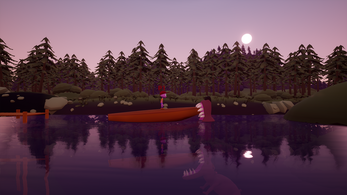